I started this blog in 2014 while preparing my thesis project at Drury University. I now continue it to chronicle travels and share new design projects. Scope it out, ask questions, and never forget to think like a designer.

6 minutes and 40 seconds of my philosophy toward handling a design problem, given in May 2016 at the Smokestack in Dubuque:

“I’m A Designer and You Should Too” 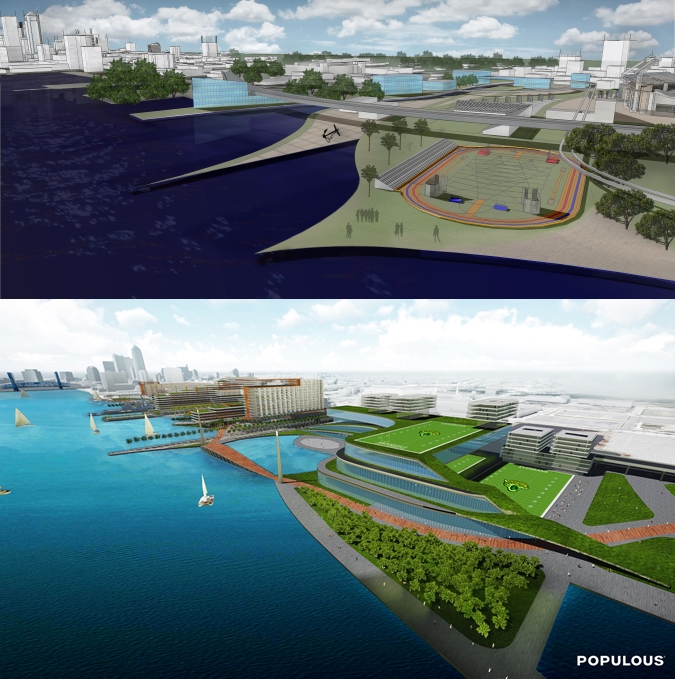 We all have dejà vu moments when we see or experience something that we swear had already happened or induced an identical psychological feeling.  When they occur out of thin air during our regular activities, they are very difficult to describe.  I usually just say, “Wow, dejà vu,” similarly to Neo in The Matrix.  Whatever causes these sensations, we all experience them and disregard them as isolated phenomena brought up due to the millions of minute details we’ve accumulated in our brains over the courses of our lives.  I recently had a different dejà vu experience, however–one rooted not in something I experienced but something I created, and my response to it conjures up a few more than three words.

I first noticed and studied the Jacksonville Shipyards proposal unveiled at the Jacksonville Jaguars state of the franchise meeting in February.  I found it remarkably coincidental that similar zones (natural, athletic, residential) were developed and similar perspective angles and diagrams were utilized to explain the design  to those I used in my thesis project.  The designs are of similar scales and utilize the same existing corridors and infrastructure while capitalizing on the natural elements provided along the river.  As I milled over this “design dejà vu”, I familiarized myself with previous development proposals for the Shipyards–proposals which I probably could have considered more during my own design process.

To be clear, I would not challenge the current Shipyards proposal to be any sort of plagiarism of my thesis project.  The Thus Spoke Jacksonville document and final design were theorized, created, and developed as an overall model for how a neighborhood in a traditional American city can form, interact, and revitalize urban fabric through understanding the tenets of expression and infrastructure.  The design was kept to the level it was in order to maintain this vocabulary.  The Shipyards proposal, as discussed by Populous principal Ben Stindt at the state of the franchise meeting (see video here) showcased similar exercises when initially forming their design in ways that came to similar conclusions to mine (i.e. focusing on north-south corridors and connecting to existing neighborhoods), but also incorporate regional materials that truly make this development a product of the city it is meant to help revitalize.  I felt that my design served as a blank canvas from which regional flair could be incorporated into each individual building–that is the difference between urban design and building design.  The Shipyards proposal handles both scales in a way that begins to scheme how the buildings on the site could look and function while maintaining an understanding of how they need to connect to the infrastructural and expressional pieces already in place.

In conclusion, the most valuable design tool I discovered while working on Thus Spoke Jacksonville was to understand the scales to which an element can be designed.  A simple detail can impact a few people, a building can impact the way a city is viewed, and an urban design can impact understanding of an entire urban typology and design philosophy.  I certainly hope that the Jacksonville Shipyards project can be realized and that whatever form the buildings take on the site is one which responds to and challenges the urban and social fabric that the city of Jacksonville possesses and projects on its region and nation.