I started this blog in 2014 while preparing my thesis project at Drury University. I now continue it to chronicle travels and share new design projects. Scope it out, ask questions, and never forget to think like a designer.

6 minutes and 40 seconds of my philosophy toward handling a design problem, given in May 2016 at the Smokestack in Dubuque:

“I’m A Designer and You Should Too”

My Tweets
Posted on 5 February 2014 by Drew Kemp-Baird

Today, all twelve of the students in my studio section presented a 36×48 board with their initial findings, linking the concepts and conclusions from their thesis documents to a tangible building project.  I put up the following on Jacksonville, indicating the lack of cohesion in planning because of a disconnect between infrastructure based on the St. Johns River and that of the highways orchestrating mass movement through the city.  The selected site, currently a parking lot next to Everbank Field, will address this problem by altering the water’s edge, allowing that expressive change to inform organization throughout the site, and then force the existing overhead infrastructure to become an additional expressive piece within this new neighborhood.  This new philosophy behind urban design could then be implemented on a variety of sites across the United States. 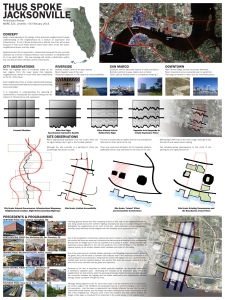 I presented to the three fifth-year studio professors and their overall response was very positive with an interesting discussion to follow.  While the abstract connection between my parti diagrams and the site were still a bit unclear, the main concepts of the thesis and the site selection seemed sound.  There were two main takeaway points that I found most helpful: first, I need to approach the programmatic organization across the site from north to south rather than south to north.  Not every neighborhood across the United States will have a river along its edge, so understanding how this new model could link back to existing suburbs and existing urban fabric is equally important to developing an aesthetically pleasing feature along the water’s edge.  The critic felt that I could focus most of my programming on the northern part of the site, making the scale of urban design a bit more feasible.  Second, another critic noted that a diagrammatic understanding of the elements desired could help me identify how they can play into the new building typology I want to achieve.  I have the elements laid out broadly–a residential component, a series of amenities, and a large gathering space outside the stadium entrance–but understanding how they can work together to re-create urban fabric rather than serve as a series of objects that happen to be close to one another is essential to my argument.

It was a good start and I’m happy where I’m at for now.  Time to design some stuff.